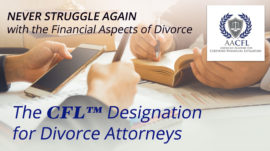 The financial skills and knowledge you earned from your CFL Certification makes your settlement negotiations so much easier – you know what to look for and consider all of the alternatives to reach satisfactory outcomes.

Child support cases like Orlowski v. Orlowski can get complicated when one parent doesn’t keep his or her part of the bargain. In this case, the father refused to pay alimony, child support, and college costs and had hidden his income and non-retirement asset structure from creditors and the court.

The court needed to decide whether it could compel reimbursement of the money owed through an enhanced wage garnishment and the ex-husband’s individual ERISA-protected annuity account funds.

The Orlowskis married in May 1993 and had two sons. After their divorce was final in 2016, the amended final judgment required Mr. Orlowski to pay his child support obligations through wage garnishment.

The amended judgment included the couples’ “partial” property settlement agreement (PSA), which addressed the equitable distribution of various marital assets, including the former marital residence and a 401(k) investment account. The PSA also provided that the ex-wife, Joanna, waived her alimony claim in exchange for a non-taxable lump sum payment of $120,000.

The trial court noted that the forensic accountant’s report showed that the ex-husband couldn’t account for $118,175 in marital funds.

The court decided Mr. Orlowski didn’t provide proof that his ex-wife dissipated marital funds. Therefore, it ruled in favor of the ex-wife.

The trial court awarded her half of the marital assets Robert dissipated to be paid from his annuity account through a Qualified Domestic Relations Order (QDRO); $5,000 of those reimbursement fees would cover the forensic account fees for the dissipation, and $48,194.98 would cover the lawyer’s fees. The ex-husband also had to pay the mediator $1,150.

Afterward, Mr. Orlowski refused to comply with the PSA and later court orders.

Despite the court’s granting of Joanna’s enforcement requests, the ex-husband refused to budge. He advised the court he transferred all of his assets, including the marital residence and annuity funds, to a self-executed trust. This led to an entry of a supplemental QDRO to enforce, by rollover, the $119,500 equitable distribution settlement owed to his ex-wife according to the PSA.

In May 2017, the trial court awarded the ex-wife counsel fees of $63,786.50 for the post-March 31, 2016 state court proceedings. The court explained that she had to file several motions to enforce the PSA terms. It recognized Mr. Orlowski obstructed the enforcement of the amended judgment, PSA, and subsequent orders and acted in bad faith throughout the case.

As the court noted, “In addition to dissipating and transferring marital assets to a trust, defendant also routinely submitted baseless filings that generated otherwise unnecessary counsel fees and delayed enforcement of plaintiff’s rights. For example, defendant filed meritless motions for recusal of the trial judge, to dismiss plaintiff’s applications for want of subject-matter jurisdiction, and for leave to appeal.”

The ex-wife moved to enforce litigant’s rights and for sanctions due to Mr. Orlowski’s refusal to pay the $131,495.48 she sought on appeal. The trial court ordered him to pay his part of the college tuition expenses but didn’t impose coercive sanctions. The court declined to impose an enhanced wage garnishment to collect unpaid counsel and forensic accountant fees.

A March 2018 amended order provided the defendant’s disposable income would be garnished at fifty-five percent, and restated that the $14,514 college tuition reimbursement was added to Mr. Orlowski’s child support obligation.

She contended that she couldn’t enforce the counsel and expert fee awards without a QDRO because of Mr. Orlowski’s manipulation of his assets.

The Superior Court reversed the trial court orders denying entry of a QDRO payable to Joanna from Robert’s ERISA-protected annuity funds to enforce the payment of the counsel and forensic accountant fees and tuition reimbursement.

The Employee Retirement Income Security Act of 1974 (ERISA) is a federal law that established a set of rules fiduciaries must follow to protect Americans’ retirement assets from misuse.

The court noted that QDROs should be used to enforce counsel and expert fee awards only when other assets needed to satisfy the awards don’t exist or the debtor has made them unavailable. Therefore, the ruling held that the ex-wife was “entitled to enforce the counsel and expert fee awards through a QDRO naming her alternate payee. The trial court failed to permit that relief.”

As for the college tuition reimbursement debt, the court concluded it could enforce the payments from the ex-husband’s QDRO.

“Enforcement of child support arrears by QDRO is allowable under ERISA’s anti-alienation exception. Second, both plaintiff and the child fall within ERISA’s definition of permissible alternate payee because plaintiff is a former spouse and the child is defendant’s son. Third, the payment of the college tuition arrears does not violate the Annuity plan and the form of the proposed QDRO was approved by the Annuity.

The court, therefore, allowed the QDRO to cover the $14,514 payable to the ex-wife to reimburse the college tuition. “It falls within the exception to ERISA’s anti-alienation provision since it is part of defendant’s obligation to support his son. It is also permissible as reimbursement to plaintiff for child support payments, to the extent plaintiff was forced to make them on defendant’s behalf, because they ‘related to’ defendant’s child support obligation.”

The court concluded that the domestic support orders are enforceable through an enhanced wage execution of fifty-five percent of Mr. Orlowski’s disposable income.

The Superior Court returned the case to the trial court for further proceedings consistent with its opinion.

The CFL Certification enhances your knowledge of child support and other potentially difficult divorce-related settlements. You learn how to maneuver through tough negotiations while you rub elbows with the legal elite. Find out more in our free information packet today.

Mixing Personal and Business Expenses Leads to Constructive Fraud ChargeHigh Income Child Support: How Much is Too Much?