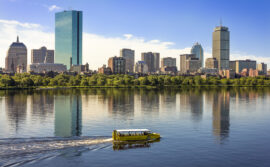 On November 23, 2021, it was reported that Lucille “Lovey” Handelsman had passed away at the age of 93. Legal experts know her as the woman who managed to wrestle away most of her husband’s holdings along Palm Beach’s famous Worth Avenue, and she died while holding the unofficial title of “Mayor of Worth Avenue.” It was a title her husband had once held. The divorce process was incredibly complex, as it involved a real estate empire worth over $550 million. The Handelsmans had built up this empire together over their 67-year marriage.

Why She Filed for Divorce

Lucille apparently had a number of reasons to file for divorce. She allegedly believed that her husband Burt was cheating on her. This was around 2016, when both spouses were well into their late 80s. But perhaps the most notable reason for her divorce was the fact that she believed her husband would leave his children with virtually nothing. She believed that Burt was more likely to leave his estate to his lawyer, with whom Lucille believed he was having an affair. Burt had previously referred to his own children as “enemies.”

At stake was a real estate empire that began in the 1950s. Starting in Brooklyn, New York, the couple eventually bought up tons of properties from across the nation, most notably in Florida and the Empire State. The couple also owned warehouses, shopping centers, and a golf course. The trial took seven months, and Lucille attempted to get her fair share of these high-value real estate holdings.

Lucille Was an Active Part of the Business

A key part of this trial revolved around Lucille’s participation in the real estate business. While her husband attempted to prove that she had very little to do with his success, her lawyer tried to show the opposite. In the end, it became clear that she was involved in marketing, attracting and vetting investors, and much more. Burt then allegedly attempted to conceal assets from his wife.

A Settlement Was Reached

Finally, a settlement was reached. Although Burt tried to appeal the court’s decision to divide the property equally, his children ultimately convinced their parents to reach an agreement outside of court. They reportedly wanted their parents to end their lives with this legal battle having been resolved. In the end, the battle was resolved in the nick of time, as Lucille passed away just one month after the agreement was signed. While it may seem like she didn’t get to enjoy her victory, her children will undoubtedly benefit from her legal battle, as they will now stand a much greater chance of inheriting a significant portion of the family wealth.

Why This Trial Was So Complex

This case was complex for a number of reasons. First, it dealt with multiple, high-value real estate assets across the entire nation. These properties had been accumulated over the course of multiple decades, and this undoubtedly required financial experts to dig through age-old records and financial documents. In addition, there was the debate over Lucille’s involvement in the business, and these kinds of issues are never easy to resolve.

Are Child Support Payments Unreasonably High? It Depends on the StateThe Most Important Financial Documents in a Divorce