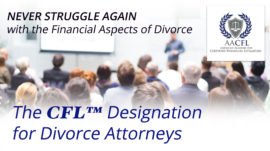 Your CFL™ Designation for Divorce Practitioners has given you the advanced financial knowledge you need to draft solid property settlement agreements (PSAs).

But, sometimes, the wording isn’t precise enough or the terms aren’t truly legal. The Pennsylvania Superior Court case of Weber v. Weber v. Weber  is an example of a PSA that some found open to interpretation. At issue was whether the agreement required the parents to pay for a child’s graduate studies.

Beth Anne and Mark Weber divorced in 1999, when their PSA provided for sharing equally the costs of “an appropriate undergraduate college or other post-secondary education for the children.”

In 2007, Beth Anne filed a motion because Mark failed to pay his share of their son’s college tuition.  They named their son a beneficiary in the agreement, and though Beth Anne didn’t file suit under a special relief petition, the son did so in 2016.  He wanted his father to repay half the cost of his undergraduate education that ended in 2011, about $104,000 total, including interest.

Mark countered that there’s a four-year statute of limitations on that request.

The son responded that the agreement was continuing in nature, and also requested repayment for half of his pharmacy doctorate degree costs, $98,227.50. The trial court let him change his original petition to include those costs.

When the case returned to the trial court, his father made a summary judgment motion to reverse the decision because of the statute of limitations. The court sided with Mark and denied the graduate school tuition reimbursement request.

In its decision, the Superior Court cited delCastillo v. delCastillo, which held that an agreement to pay for education beyond high school didn’t include graduate studies. Judge Mary Murray noted that under contract law, the trial court interprets the contract when it’s unclear.

In the mother’s and son’s joint responsive brief to Mark’s summary judgment motion, the son stated that he didn’t graduate from Florida State University, but incurred “graduate school costs” to attend Palm Beach Atlantic University. The brief also asserted that under the plain language of the agreement, the father had to pay half of the son’s pharmacy education expenses because the phrase “post-secondary” includes any education after high school.

The knowledge you gain about the financial aspects of divorce in the CFL™ course can help you advance in your career while you network with the nation’s top lawyers.  Learn more about the secrets of legal success today.

High Income Child Support: How Much is Too Much?What’s Done is Done